The development of computer technology has helped bring the modelling of the evolution of our universe to a qualitatively new level. Scientists received new information about the influence of black holes on the distribution of dark matter, learned more about the formation and propagation of heavy elements in space, as well as about the origin of interstellar magnetic fields. 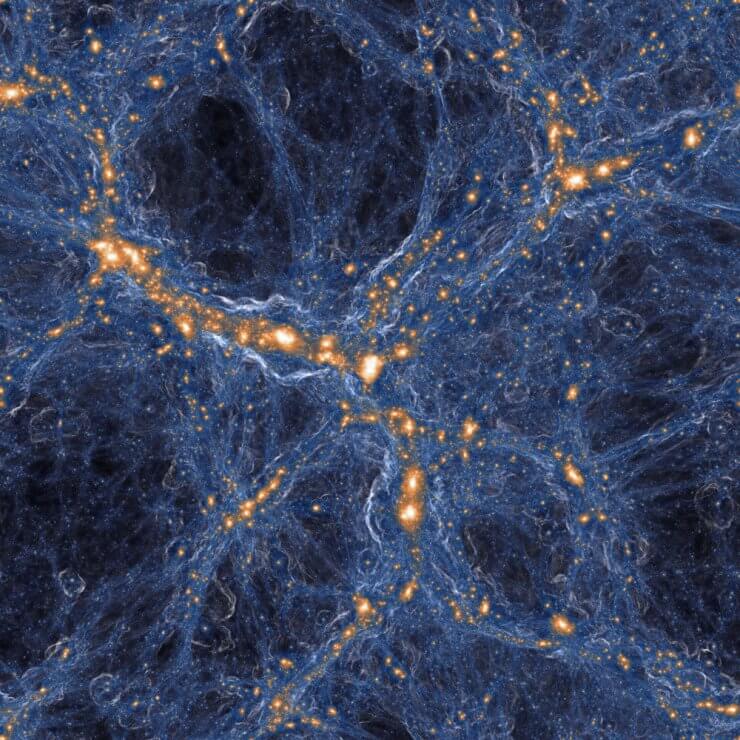 Visualization of the intensity of shock waves in cosmic gas (blue) around compact structures of dark matter (orange and white). The gas in these shock waves is accelerated when it collides with the galactic filaments.

Volker Springel, a senior researcher at the Center for Theoretical Research, Heidelberg, led the project. The work involved astrophysicists from the Max Planck Society of Astronomy Institute (MPIA) and Astrophysics (MPA), Harvard University, Massachusetts Institute of Technology and the Center for Computational Astrophysics (CCA). The new computer model of the universe is called Illustris: The Next Generation or IllustrisTNG.

“Our model is the most advanced simulator of its kind,” says Shy Genel, a CCA researcher who helped develop and debug IllustrisTNG. The details and scale of the modelling allowed Genel to study the formation, development and growth of galaxies in conjunction with the star formation process taking place in them. “When we observe galaxies with a telescope, we can only measure certain indicators,” he says.

“By applying simulations, we can track all properties for all galaxies. And not only at the current time, but throughout all stages of evolution. ” The scientist believes that simulations of this kind will help us learn more about how the Milky Way originated when the Earth formed and what will happen to our galaxy in the future. 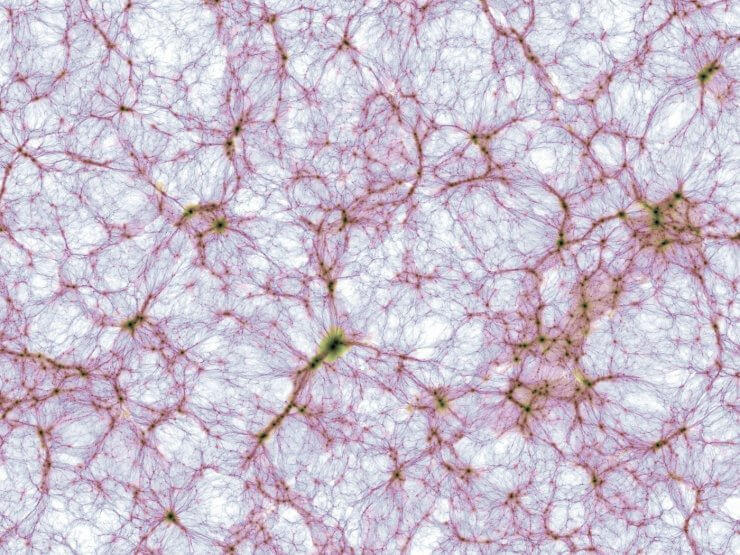 Thin section of a large-scale space structure simulated by IllustrisTNG. The brightness level reflects the density, and the colour indicates the average gas temperature of an ordinary (“baryonic”) substance. The image shows a region of space approximately 1.2 billion light-years from left to right. At the moment, this is the largest magnetohydrodynamic model of galaxy formation, consisting of more than 30 billion elements.

The creation, testing and study of new simulations within IllustrisTNG is being carried out by Mark Vogelsberger, Associate Professor of Physics at MIT and the Kavli Institute for Astrophysics and space research. Vogelsberger uses IllustrisTNG to research the composition of the large-scale magnetic fields permeating the universe with doctoral students Federico Marinacci and Paul Torrey.

The high resolution of IllustrisTNG, combined with its advanced galaxy formation model, has allowed us to explore the problem of magnetic fields in greater detail. Previous cosmological simulations have not been as accurate, ”said Vogelsberger, one of the authors of three papers recently published in the Monthly Notices of the Royal Astronomical Society. 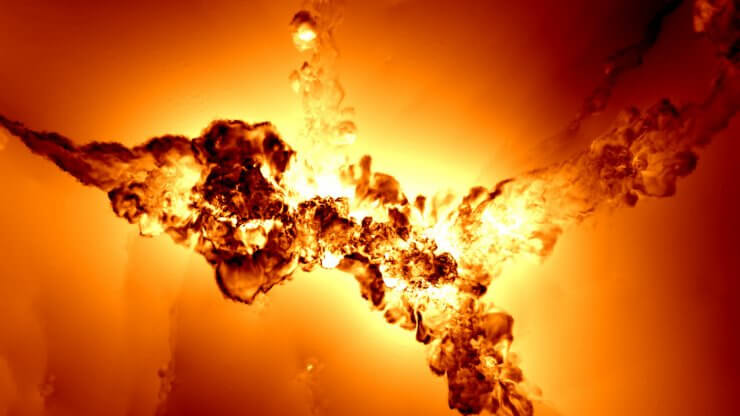 Visualization of the gas velocity on a thin cut (100 kpc in width). In the centre is the second-largest galaxy from the TNG100 simulation. Where the image is black, the gas hardly moves, and the white areas have velocities in excess of 1000 kilometres per second. The image can compare the movement of gas in the filaments connecting galaxies with fast chaotic movement due to the gravitational influence of a supermassive black hole in the centre.

Realistic simulation of the universe

IllustrisTNG is a successor model developed by the same research team to the original Illustris simulation, but it has been revised to incorporate a variety of physical processes that play a critical role in galaxy formation and evolution.

Like Illustris, the project simulates a cubic universe that is smaller than ours. This time, the project simulated the formation of millions of galaxies in an area of ​​1 billion light-years on the edge. In the previous version, developed four years ago, one side was 350 million light-years long. “IllustrisTNG is the largest hydrodynamic modelling project for space structures to date,” notes Springel of the University of Heidelberg.

The strength of the interstellar magnetic field: The blue and purple regions along the filaments of the cosmic fabric have low magnetic energy, while the orange and white regions show significant magnetic energy within halos and galaxies. The video shows the evolution process for an area with a side of 10 megaparsecs. The TNG Collaboration

A network of cosmic dust and dark matter, modelled in IllustrisTNG, forms galaxies that are very similar in shape and size to real ones. The hydrodynamic simulation was able to measure a precise image of the clustering of galaxies in space for the first time. When comparing the simulation result of IllustrisTNG with real-life observation data, such as those provided by the Sloan Digital Sky Survey (SDSS), a high level of realism can be noted.

In addition, simulations show how the structure of the universe can change over time, including the distribution of dark matter, which underlies it. “Especially interesting is the fact that we can accurately predict the effect of supermassive black holes on the distribution of matter within huge regions,” says Springel. “This is an important step that will help us in the future to correctly interpret the measurement of certain cosmological characteristics.”

Comparison of intergalactic gas (mass) distribution models in TNG100-1 and Illustris-1. Regions of low density (black and dark blue) turn into cosmic filaments (yellow and green), then gas halos (light blue) and individual galaxies (white). The evolution is simulated in the same region with a side of 10 megaparsecs. The TNG Collaboration

As part of the project, scientists have created a high-performance AREPO code, perfect for parallel computing. The Hazel Hen supercomputer, the most powerful in Germany, located at the High-Performance Computing Center in Stuttgart, was used for the simulation. One of the two main simulations ran over 24,000 processors for over two months. According to Springel, the simulation produced more than 500 terabytes of output data: “It will take more than one year to analyze such a volume of data, and at the output, we will certainly get a lot of interesting ideas regarding various astrophysical processes.”

A look from the outside at an area with a side of 10 megaparsecs, illustris (left) and TNG100 (right) are compared. The video demonstrates the change in gas temperature (blue – cold, green – warm, white-hot). In both cases, rapid temperature fluctuations and flares at the nodes of the space network are caused by such high-energy processes as supernova explosions and the emergence of hot, high-speed winds near supermassive black holes.

Dylan Nelson, a researcher at the MPA, was able to show the effect of black holes on galaxies in another study. Star-forming galaxies shine brightly in the blue light of their young stars until a sudden evolutionary shift interrupts the formation of stars, at which time old red stars begin to dominate the galaxy and it turns into one of the old and “dead” galaxies.

“The only physical object that can stop star formation in large elliptical galaxies is the supermassive black holes at their centre,” Nelson explains. “These gravitational traps, with their jets, are also capable of creating additional ultrafast gas streams (up to 10% the speed of light) and thus affect giant stellar systems that are billions of times larger than a relatively small black hole.”

Each view shows a different simulation result (from left to right, top to bottom): density of gaseous matter, the density of dark matter, stellar mass, magnetic field strength, gas temperature, gas metallicity (relative concentration of elements heavier than helium), gas velocity and oxygen distribution in the fifth ionized state (O5 +). Each view shows the same region of space, with all of these components modelled for their combined influence. The TNG Collaboration

Analysis of the formation of galaxies

Our interpretation of the hierarchical structure of galaxy formation is also enhanced by IllustrisTNG. Theorists argue that small galaxies must first form, which, under the influence of gravity, then merge into larger and larger objects. Numerous collisions literally tear apart some galaxies and throw their stars into wide orbits around the newly formed large galaxies. As a result of this process, a faint background glow should appear around the galaxies. Due to their low visibility, these projected faint halos are very difficult to detect, but IllustrisTNG has been able to accurately model what astronomers need to look for.

“Our forecasts can now be systematically verified by observation,” says Annalisa Pillepich, MPIA researcher who studies IllustrisTNG results. “This is a serious test for a theoretical model of the hierarchical structures of galaxies.”

The most massive cluster is TNG300 with a halo mass about 1015 times the mass of the Sun. Rotation allows you to look at the structure from different angles, time is stopped. Each of the four regions exhibits the same predicted X-ray emission, and the superimposed contours show synchrotron emission (electromagnetic radiation from charged particles moving in a magnetic field at relativistic velocities – translator’s note), as one of four radio telescopes would observe: VLA. LOFAR, ASKAP or SKA. The TNG Collaboration

1 thought on “IllustrisTNG – Most perfect model of the universe”